Bitchin' about the Kitchen (and cupcakes) 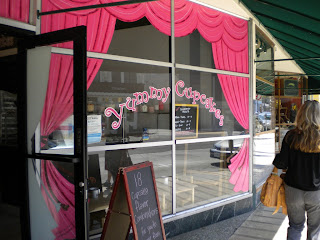 You'll find a gourmet cupcake bakery at any upscale shopping locale in Southern California these days. We happened across Yummy Cupcakes on the Santa Monica Third Street Promenade. Yummy Cupcakes earns a hearty thumbs up for lovely presentation. Their cupcakes are more festive than Dots for sure. I enjoyed Yummy's moist Red Velvet cupcake, though it was more brown than red. Had it not been for the name, I would have guessed I was eating a chocolate cupcake. Props to their Shirley Temple frosting, which actually tasted like a Shirley Temple drink! The fun came to a screeching halt, however, when trying a vanilla cupcake with sprinkles. Bizzare flour taste. Heavy consistancy. Big turnoff. 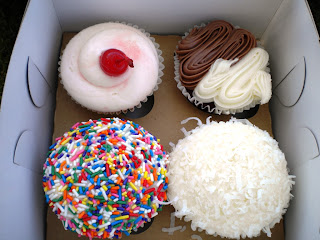 Had lunch at Mao's Kitchen on Melrose, which boasts natural, Chinese homemade cooking. I liked the sparse interiors with colorful Communist Revolution posters adorning the walls. My Hong Kong-style ramen was scorched on the bottom, which is a no-no, but all in all it tasted good. My husband liked his black bean and veggies entree. I will say that Mao's Kitchen stir fries fish with the best of them. 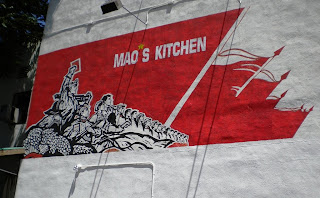 Korean actor, Lee Byoung-Hun, is in poster form all over L.A. as Storm Shadow in the upcoming G.I. Joe movie. He was peering at us on the wall outside of Mao's Kitchen. 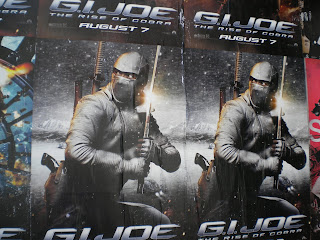