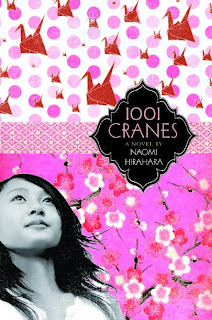 I confess that the eye-popping cover is what drew me to 1001 Cranes by Naomi Hirahara. Standing in a Little Tokyo bookstore, I halted for a quick second when I realized 1001 Cranes is teen fiction. I generally dislike teen fiction. Even as a teenager, I felt like authors talked down to readers with flat stories and overly simplistic characters. But as I skimmed 1001 Cranes, I saw that Angie, the story's protagonist, isn't always nice, her parents aren't perfect, and her boyfriend-to-be is a cigarette-smoking skateboarder.

I duck by head towards his arm. His skin is nice and tan, like a perfectly roasted marshmallow. I gingerly take the bottom of his sleeve and lightly brush the tip of my nose with it. His sleeve smells like burnt leaves and sweat. I like the scent.

"Thanks," I say, and I mean it. Not just anyone would let a perfect stranger wipe her nose on his clothes. "Now what am I going to do?"

He gets up and offers his hand to me. He helps me stand and says, "I'm Tony, by the way."

Ajumma (who hates Bella, Edward and everything about Twilight) hopes Hirahara pens a sequal to 1001 Cranes. 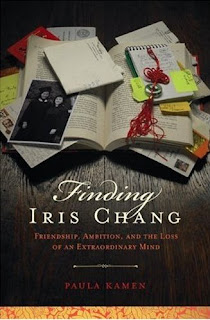 Iris Chang, author of The Rape of Nanking, was a brilliant journalist who ended her own life in 2004. Chang's friend and fellow writer, Paula Kamen, examines the Chinese American author's personality and ambitions while delving into the question of why Chang (who previously did not suffer from severe depression) killed herself.
Posted by Ajumma at 6:39 PM