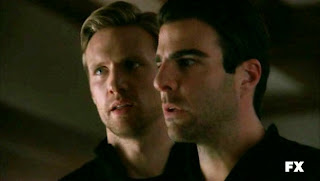 The big news when American Horror Story aired its Halloween episodes was that Zachary Quinto guest starred as the house's previous doomed tenant, Chad.  What about his tall, blonde and philandering lover played by actor Alexander Skarsgard? Yes, no? That wasn't Skarsgard, but another tall blonde with equally nice bone structure named Teddy Sears.

For those not familiar, Skarsgard (True Blood and Straw Dogs) is shown above and Sears (One Life to Live) is below with the popped collar. 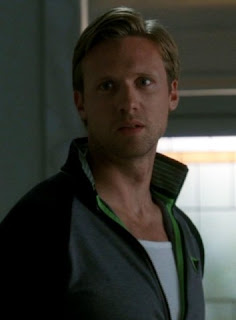 I think Sears resembles Skarsgard with a hint of Grant Show from Melrose Place. And Skarsgard looks like Sears with a dash of Toby Maguire. I love their hair. There can never be enough blonde men in the world. 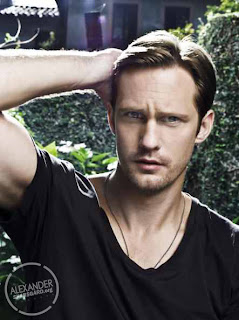 I leave you with a photo of Teddy Sears in his American Horror Story Halloween outfit.  I tried to find a photo of Alexander Skargard also wearing a cowboy hat, but apparently that's not his style. All I know is if I were Sears I'd wear a Stetson from this day onward wherever I went. 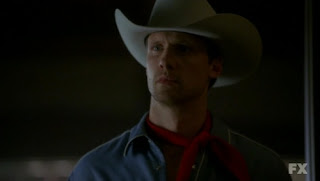