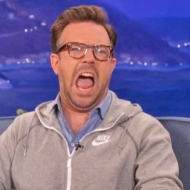 While seated under a painting of The Last Supper in L.A.'s Koreatown, I spent an hour of hell as an ajosshi relentlessly kneaded my arches and pounded my calves into submission.  My girlfriend, husband (who we talked into getting a massage for the first time), and I wanted to try the popular Chinatown foot massage from Spaahbulous, but they were closed.  Hubs suggested we try someplace in K-town rather than driving to Pasadena to Heart and Sole.  A foot massage shop was having a grand opening upstairs, so we decided on them.  A tanned and scrawny man directed us to three recliners (under The Last Supper) where we soaked our feet.  At this point I was looking for the female masseuses.  Instead two additional men popped out and began vigorously kneading our shoulders.  I got the scrawny ajosshi who had long fingernails and callouses that he'd rub along my calves.  His thinness disguised a disturbing strength which he used on my arches with gusto.  The picture of comic Jason Sudeikis, above, is like me undergoing the foot massage. 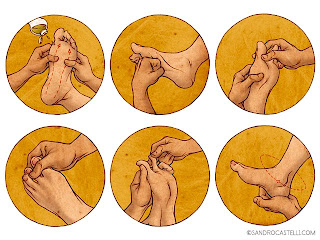 When I told him the pressure was too painful he informed, "This is medium," and continued as before. I was tempted to get up and leave, but I didn't want to insult him or embarrass my husband or friend. We were the clueless ones since we hadn't researched Korean foot massages before seating ourselves in those recliners.  Now I see when talking about Korean foot massages online people say PAINFUL, DON'T DO IT, and WANTED TO SCREAM.  Somehow the three of us got through the hour; my husband by seeing the humor in the situation and my friend by pretending to be dead.  As we left, an elderly Korean couple and a middle-aged white lady waited for our chairs.  How could an old lady undergo the same massage without having her foot bones pummeled into powder and her leg veins burst?  My husband reminded me that older Koreans are hard core.  Of course.  Their motto, as supported by my foot massage, is pain equals gain.  Photos NY Magazine and Sandro Castelli
Posted by Ajumma at 10:36 AM