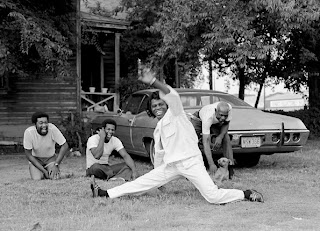 Snuggled in for a night of television, my options were celebrity gossip dailies, Vietnamese talk shows, and public television. I opted for PBS.  A documentary came on about a 1968 concert given in Boston, by James Brown, following Martin Luther King Jr.'s assassination.  City officials were scared out of their minds about black concertgoers rioting in Boston as was happening in large cities around the States.  They considered canceling Brown's show.  In the end, they encouraged people to stay home and after finagling with Brown and his manager, Boston's PBS station aired Brown's concert live.

Three things stand out about the documentary, The Night James Brown Saved Boston.
1) James Brown was a dancing, singing, screaming, entertainment dynamo.  (There was a point when he stopped to sing a ballad. I could hear faint echoes of Bruno Mars, but with layers and layers more depth.)  His impromptu dancing while his band played was nonstop.  My husband said it was obvious Brown was enjoying himself.

2) Until watching this documentary, when I imagined James Brown I pictured Eddie Murphy dancing around his hot tub.  Or Brown's 2004 mugshot would flash through my mind. I did not realize following Boston, Brown traveled to DC to discourage riots there.  I didn't know he regularly visited fans in poor neighborhoods, children in orphanages, or that he endorsed politicians (both Democrats and Republicans).  How interesting!

3)  There's a scary moment near the end of Brown's concert in Boston when young fans are leaping onto stage and cops are intervening, pushing them off like bouncers.  It escalates to where Brown stops the show and keeps telling everyone to wait, and the police to back off.  It is THE MOMENT where the entire hall and city could explode into mayhem.

You can watch The Night James Brown Saved Boston.

Photo via Collider
Posted by Ajumma at 4:29 PM