Surfers I have met 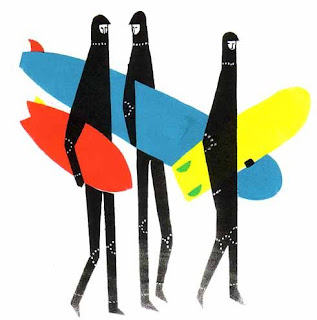 I've been surfing (using this term in the loosest form possible) for a few months.  One surprisingly awesome part of the whole experience has been meeting real surfers.

Hunter and Alex: Surf instructors!  Encouraging and as funny as hell.  I find those who tend to work with kids are the best teachers.  It's obvious they love the ocean and life.  It's crazy to think about how many surfers they're creating and sending forth.

Lisa: Shout out to Lisa for being so cool and friendly AND she's Asian. Woot woot!  Lisa is nice to me and asks me week after week how the water is even though she knows I'm the biggest kook on the beach.  Props to her for riding a shortboard.

Eric: Eric, you can borrow my wax any day.  Thanks to this gentleman for offering his cell phone to me when I thought someone had stolen my keys on the beach.  He showed me how to switch from the phone number area to the message section of the text after I told him I didn't know how to do it because "I have a different kind of phone."  LIES!  Looking back on it, we have the same kind of phone.  Eric said he hopes someone helps his wife if she were in trouble.  He also showed me his lockbox that he uses to keep his keys safe.

Tom: Tom is up there with Alex for his zest for life.  Tom is like a big ball of sunshine and happiness.  He spent almost an hour chatting with me in the beach parking lot after we both decided not to get into the water (He because conditions were too crappy for his skill level.  Me because my arms were too wimpy for the paddle out through churning water).  Tom gave me all sort of advice on timing, watching the waves, and what not to do.  Tom has been surfing OC for years and has never been stung by a stingray.  Mind boggling.

Erin: Erin drives a VW bus covered in stickers parked on the northside of Huntington Beach's pier.  He looks like a shorter, blonder Iggy Pop.  When I first met Erin he was laughing about getting spanked by a wave at the pier that morning.  He told me he notices when he surfs the faster, stronger waves in Newport Beach his surfing improves when he returns to HB.  Erin urged me to shake off my chicken feathers about catching outside waves.  He said when it's all said and done it's in God's hands.  I can't help but like Erin.  He's so genuine and unique.

Mike: I had a blowout session last Friday morning, as in I blew big time.  I was getting tossed here and there so badly that an OG on a shortboard took the time to come over, wade into shallow water, and shout to me, "Keep paddling!"  He was cool and gave me tips about my hand placement and the fact I need to paddle harder when catching waves and wait until I feel the wave moving my board to pop up.  Anyway, when I came back to my car Mike was suiting up one spot over.  Mike, with his shaggy hair and springsuit, is laid back.  He asked me how it was and if the water was warm.  (I love when people ask me about the water's temperature because I can answer it truthfully without having to admit I suck at surfing.)  Mike's been shanked twice by stingrays this year.  Apparently neither time he went to the lifeguard station to soak his foot.  In fact, after his second sting he squeezed out the poison and went grocery shopping in Long Beach.  Suddenly his foot swelled and felt like it was on fire.  I told him that was hardcore, to which he replied it was actually stupid.

Artwork by Keiron Lewis (who surfs and is from Down Under)