Korean speedskater coaching in US 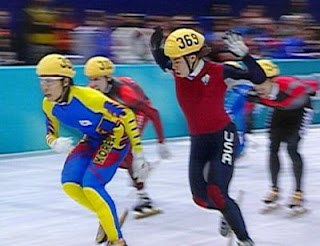 If speedskater Apolo Ohno stepped foot into Korea during the winter of 2002 I'm fairly certain his body would have been torn to shreds. Due to the short track debaucle with South Korean skater Kim Dong-Sung, Ohno got the gold medal in the 1500 m and became known as The Devil across the peninsula. Ajumma was living in Korea at the time and can tell you that people seriously wanted him D E A D. If you ever wondered what happened to the disqualified skateter Kim Dong-Sung, the two-time Olympic medalist has returned to the states and is coaching American kids to go for the gold. Read an update on Kim here.