Kim Hye-Ja and Wonbin star in Mother, a new film by Bong Joon-Ho. Mother tells the story of a mother trying to save her son who is falsely accused of murder. Bong, director of Host and Memories of Murder, says "I want to make the saddest yet most beautiful crime drama ever. At the center of this story is a small and weak mother who stands alone, a woman so determined that she can't even stop herself.'' (Variety)

Bong surprised some by casting Korean-wave star, Wonbin, as the mother's meak son. Bong feels despite Wonbin's mega success, one can still see the pure country image in his face. Wonbin, who hails from Kangwon province, "is far from his image of a refined city-dweller," says Bong. Mother is expected to premiere at the Cannes Film Festival in May 2009. 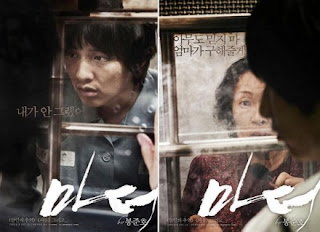