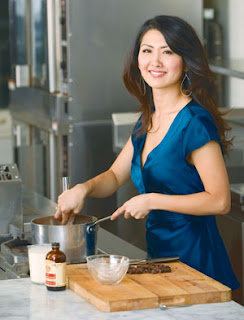 I turned on the Food Network, this morning, to see a plucky Asian woman showing Bobby Flay how to make blackberry pastry pies. "She's Korean," my husband speculated. She did have the tell tale sign of her head being the biggest part of her body. As she started folding her blackberry crust into a dumpling shape with fork creases ("She's making mandoo!") our guessing became even more animated.

Ajumma: Maybe she's Bobby's wife.
Hubby: Yes! I heard he has an Asian wife. Or did you start that rumor?

If we had seen the start of the show where Bobby's mystery guest shared her mother's recipe for kalbi (grilled short ribs) we would have realized she was indeed Korean American. Flay's guest was none other than pastry chef Judiaann Woo. Woo, a graduate of New York's French Culinary Institute, is the executive director of decadent dessert site PastryScoop.com. Read a Page Six Magazine interview with Ms. Woo, here.
Posted by Ajumma at 10:23 AM