They got my hair right 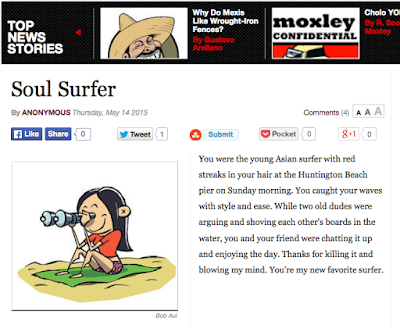 A few weekends ago I was on the Huntington Beach pier.  HB had notable waves that Sunday and skilled surfers were out in droves on the northside.  One kid stood out.  He was taking all sorts of waves, even ones other surfers were ignoring.  His pop up was interesting to me in that he'd appear get up late, almost where I thought he was going to miss the wave.  But then he'd be on his feet and tearing shit up.  I had no idea who he was but he was so damn steezy.  Being the dork I am I wrote a "Hey You!" to OC Weekly and they published it.  God, I wonder if I looked as creepy in real life as I do in the little illustration.  They got my hair right though!

Update: It turns out the brilliantly awesome surfer who has nudged Nathan Fletcher down one notch in my list is a young pro from Huntington Beach (and number 22 on Surfer's Hot 100).
Posted by Ajumma at 7:40 PM