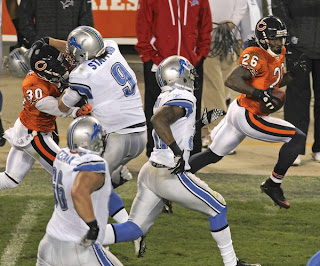 I've developed a strange fondness for men slapping each other around on the athletic field as of late. Case in point, quarterback Matthew Stafford hammer-throwing defensive back D.J. Moore to the ground after an intercepted pass during last night's Bears-Lions game. Then as if Moore were a Twisted Sister, he tells Stafford he ain't gonna take it and pummels the beefy Texan with lightening speed. In the end the only player to be penalized was plucky Moore. Watch the squabble here.

I don't know if I've seen too much Spartacus or what. The last time I enjoyed myself this much was watching the Dutch soccer team man-handle Diego Lugano after his cleates-first dive into Robert Van Persie's ankle during the 2011 Copa America.

Update: The NFL has fined Stafford $7500 and Moore $15000 for the brawl. Moore says he "did the crime and will do the time." Stafford, meanwhile, says he doesn't care about the fine. Photo by Scott Strazzante, Chicago Tribune
Posted by Ajumma at 9:51 PM